Dak is always good for a WTF throw or two a game, but he’s still a good QB, and if you stuck him in Shanahan’s offense, he’d be an all pro. Purdy in any other offense would look like the third teamer he is.

and Dak is $35M/yr and Purdy the minimum for years.

Purdy is a rookie. Right now he’s Trent Dilfer to me.

Three of four starting QBs in the conference championships are from Big XII schools.

Purdy is a rookie. Right now he’s Trent Dilfer to me.

I don’t watch much football anymore. But… I went to Fresno State when Dilfer was there. And, a bunch of my friends were on the team with him. 41,000 lunatics screaming at his wounded-duck fluttering, high-arc passes was no way to spend a Saturday. I was shocked to see him drafted and even more shocked to see him win a Super Bowl. I’d ask friends on the team what the coaches saw in him and they would just shrug.

Reuters, on SF DL Omenihu’s arrest (not making this up): 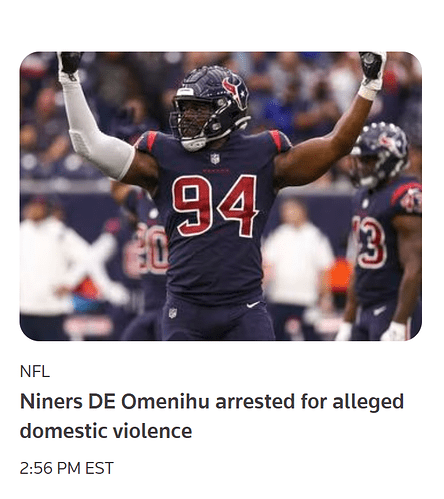 Purdy out in Q1 with an arm injury

I hate both teams. I think i want 9ers to win.

And the best thing about Ryans coaching the Texans is he’ll be out of the NFC.

Wow! That was quite a run.

Hard to win a playoff game with your 4th string QB

Hard to win when you make really bad penalties. At least the cowboys would have tried to beat the eagles.

Yep, Niners are in mental meltdown mode and running a HS offense.

“At least the Cowboys…”? Lol, but I do respect the fandom.

Hard to win a playoff game with your 4th string QB

Rough day for the 49ers.

I am but a humble CFB fan, not as learned in the ways of the NFL, so let me ask:

Is Kelce the best TE ever?

Not so much as a blocker, but he’s way, way up there as a receiving TE.

I don’t know if he’s better than Winslow, Bavarro, and Newsome, to name a few, but he’s pretty damn good. He benefits from playing in a more pass-happy era and an offense that features him. But he’s incredibly good at finding space.