I think the “rules” are ridiculous, but the pinnacle of stupidity may have happened yesterday. More than one player (including one on his team???) said Tatis’ grand slam on a 3-0 count violated the unwritten rules. Are you fucking kidding me?

The Rangers made a pitching change and threw behind Machado. Freaking irresponsible.

They really learned from the Joe Kelly situation, didn’t they?

Btw, even the Padres manager disapproved to the media. The insular world of MLB continues to perplex.

I was shocked his manager said that. I think the onus is on the Rangers to throw a strike! Not blame the hitter for being good.

But its the Rangers and they whine about everything.

I was shocked his manager said that.

He’s a longtime ranger too.

The whole thing is both typical and perplexing. Baseball is supposed to be fun. It is also supposed to be a competitive sport. Acting like one of brightest young stars of the game shouldn’t hit a home run is neither of those things.

To his credit, Tyler Bauer came in with the correct take:

BTW, he scalded both of the homers that he hit in that game. The salami was just shy of 110mph exit velocity to the opposite field, but the 3-run HR he had one inning prior was maybe more impressive: a 112mph, 17°(!) cruise missile that looked like a hard-hit line drive to the gap all the way until it landed in the bullpen.

I must’ve missed the unwritten rule that says you get to underhand it in on 3-0 and nobody’s allowed to swing.

What in the fucking fuck is this shit? Everyone involved in this deserved a kick in the dick. 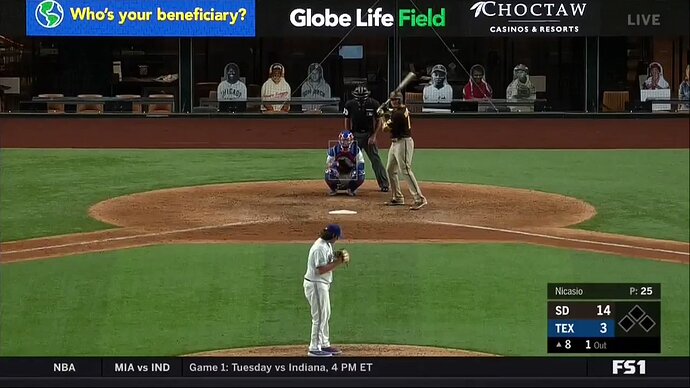 @DannyVietti
The Rangers just threw behind a Padres hitter because the previous hitter (Fernando Tatis Jr.) hit a granny on 3-0. Here's a thought: how about you learn how to not give up 14 runs and not give up 7 RBI to a kid who can barely legally buy a beer. https://t.co/y68zDQW8dS
BudGirl (Leslie Pruski) August 18, 2020, 3:12pm #8

Our patron saint of rationality:

@Collin_McHugh
Swinging in a 3-0 count should not be against any rules, no matter the score. Before a game I would always look to see what % a guy swings 3-0. If it’s over 20%, it means I can’t just groove one. The guys who will never “give you a pitch at the plate are the toughest AB’s.”

Later in the thread he makes the point that Tatis will have a 3-0 count in a high leverage situation sometime later in the season and the pitcher will remember that pitch and feel further pressure. “Advantage hitter.”

It’s like he’s a professional that doesn’t think an at-bat should just be mailed in!

This is definitely an example of sheer dumbassery. I understand not stealing when up big(bigger than 7 btw) but 3-0 with the bases loaded, that’s when you WANT to swing if you get a good pitch. The Rangers, and anyone else upset for that matter, can fuck right off. Don’t throw a cookie to a really good hitter if you don’t want to get blasted.

If love to see McHugh back here.

If love to see McHugh back here.

Put him on the coaching staff, put his wife in the broadcast booth.

I do not think I agree with any of the alleged “unwritten rules.” Not one, especially “you cannot break up a no-hitter with a bunt.”

Look for Manfred to issue a “participation strike” to all hitters who get a 3-0 count.

The insular world of MLB continues to perplex.

An imitation of life.

The Rangers manager, Chris Woodward, hit his only career grand slam up 6 runs in the 9th. I guess he’s carried this guilt a long time.

The Rangers manager, Chris Woodward, hit his only career grand slam up 6 runs in the 9th. I guess he’s carried this guilt a long time.

Someone should send MM’s factoid to the Rangers head idiot on Twitter.

It’s my first tweet to go viral. Keith Law liked it and I feel dirty.

The unwritten rules I agree with are the ones about how you conduct yourself on the field. You run out popups, you make a token trot to the wall on an obvious home run, when your a pitcher and the manager comes to pull you, you wait till he gets there to leave the mound, don’t mess with other guys’ superstitions, no matter silly you find them, you don’t walk in front of the plate when coming to bat…everyone’s mileage may vary though.