James Click: “When I came in, looking at the roster and when certain guys would be free agents and things like that, my assumption — my estimation — was that we had at least a year if not two years where we should be a very competitive team. And so the hope was to not make a lot of massive changes to the roster in those two years, and spend those two years focusing on getting the rest of the organization where it needs to be. 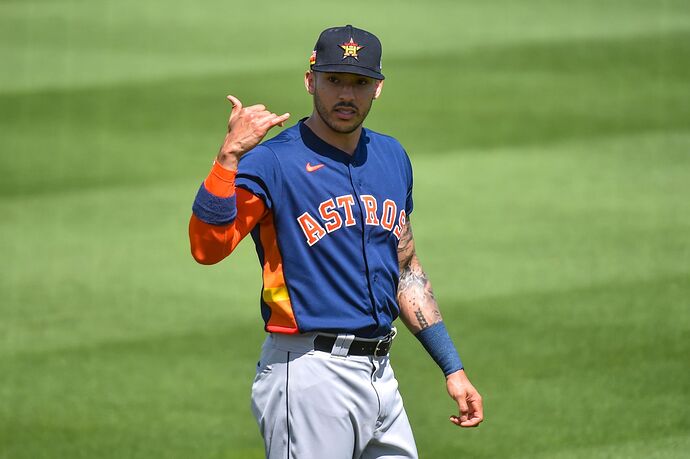 MLB on the Record: AL West GMs discuss their competitive windows as Astros...

Executives answer the burning questions about where their teams stand as division enters a time of flux.

We’ve been spoiled/blessed for the past 4 seasons.

The division appears to be very winnable.

I’m all for keeping the party going as long as we can.

This sounds like the 2 years before Springer’s and Correa’s free agencies.

I think that because of the development of Alvarez, Tucker, and the young starting pitchers, the window has been extended without major roster rebuilding.

I hope Correa resigns, but if not the team is still the class of the AL West, maybe the entire AL.

I am interested with how the Astros outfield will look over the next few years.

If we ONLY look at players currently in the organization and scouting tools ratings and prospect grades this is how I think it should go:

Obviously LOTS can change but McKenna, Barefoot, Brewer, and Daniels are all on most or all top 30 prospect lists

With Siri, Julkes, Costes, etc along with new signees and draft picks in the future in case injury fill ins and AAAA type replacements are needed I think the best use of those 4 players is to trade them now while they are at max value.

I’m giddy. Are you giddy?

(And hey Idstrosfan, I found your thread for talking about 2023 roster construction)

It wasn’t that long ago the franchise was at the bottom of the heap and not good. It was a slog rooting for any and all wins the Astros could muster and searching for any semblance of positivity in those dark days. Plus, the fucking arlington mouth-breathers with their fair weather chucklefuck fans were on top chirping how great they were and would now be the preeminent MLB team in Texas, yada, yada, something, something gazpacho.

I’m so mighty grateful for this run/success the past few years (even after being frog-marched to the AL/Softball League- fuck you in perpetuity, bud selig).

Here’s hoping we can enjoy this ride a lot longer and that the franchise is poised well for the future.

The AL doesn’t bother me anymore. Maybe I’m just accustomed to it now. But after following this franchise since the Colt .45 days it is somewhat refreshing to play different teams in different cities. I think the biggest change was the move from the dome to MMP and the different style of play and roster construction that came with it.

I’m also accustomed to it now, but what will always chap my hide is the way in which the Astros were forced over while the fucking brewers, selig’s family’s little pet and originally an AL franchise he approved moving to the NL and creating the imbalance of teams, stayed in the NL Central.

What I am amazed with is how the Astros continue to curate the pipeline of talent in and through the org. Ever since the farm system has started to be ranked near or at the bottom of farm system rankings in 2019, they’ve continued to produce top-shelf talent. Alvarez-1st, Javier-3rd, Garcia-2nd, Peña-trending 2nd in latest MLB poll for AL Rookie of the year. With other somewhat lesser talent producing at the MLB level on the club or with other teams when used as trade components. Even with the front office machinations over the last few years, I’m not sure there is a better org at not only evaluating talent but also developing existing talent to max value.

Two main thoughts jump out at me because of all of this: 1) I’ve had to rethink my thoughts about the window closing around now and 2) Jim Crane is an excellent owner/manager. It would be easy to say we are still in the window that Luhnow created but that’s almost impossible to intellectually sustain anymore. Whenever you see sustained excellence in an org that has medium or high executive and management turnover, the only place you can realistically attribute that success to is the top level executive and the environment they are able to create that generates that sustained, elevated performance.

Well said, David- also adding to all your solid points the ensuing tumult the organization/franchise endured after being thrown under the bud by that peckerhead manfred and mlb for apparently the most egregious cheating scandal ever concocted in human history, and it makes things even more impressive.

And Props to Click and the job he has done since he arrived. Luhnow laid the foundation but Click has done needed maintenance and even added some upgrades.

Yes, he has and does not get enough credit for it.

Where is that damn whistling coming from?

I think Click is better than Luhnow, in that he’s just like Luhnow but without the drama.

I do not know about the drama; I do know Luhnow was despised by lots of people in the industry, and not only because he championed analytics well before anyone else did. He was often arrogant and an asshole to his peers in baseball. I heard about him more than I wanted each ST during visits with my scout friend.

I just mean all the public things. Being despised before (and after) coming to Houston, his power struggle with Walt Jocketty and John Mozeliak in STL, then in Houston the Chris Correa information theft/leak, the Brady Aiken mess, hiring guys like Taubman, the Osuna trade, Sig Mejdal and Mike Fast quitting the organization, the guy getting caught filming the Red Sox in 2018, and of course the trash can thing and its fallout (including Luhnow’s lawsuit and blaming it all on the video guy).

Luhnow may not bear individual responsibility for all those things, but it seems like wherever he goes, a wake of drama follows. The Click era has been a breath of fresh air by comparison.

Yeah, some of those things I did not mind at the time, but others did. Taubman’s end was a disaster.

This is gonna get sooooooo interesting. He won’t opt in and will be a free agent at age 40 coming off a likely Cy Young-quality season. What do you offer the guy? 3 yrs/$100MM?

My guess would be it’d be like the one he signed this offseason, a 1 year + 1 player option at higher numbers

FWIW, the Chron in an article posted late this evening … 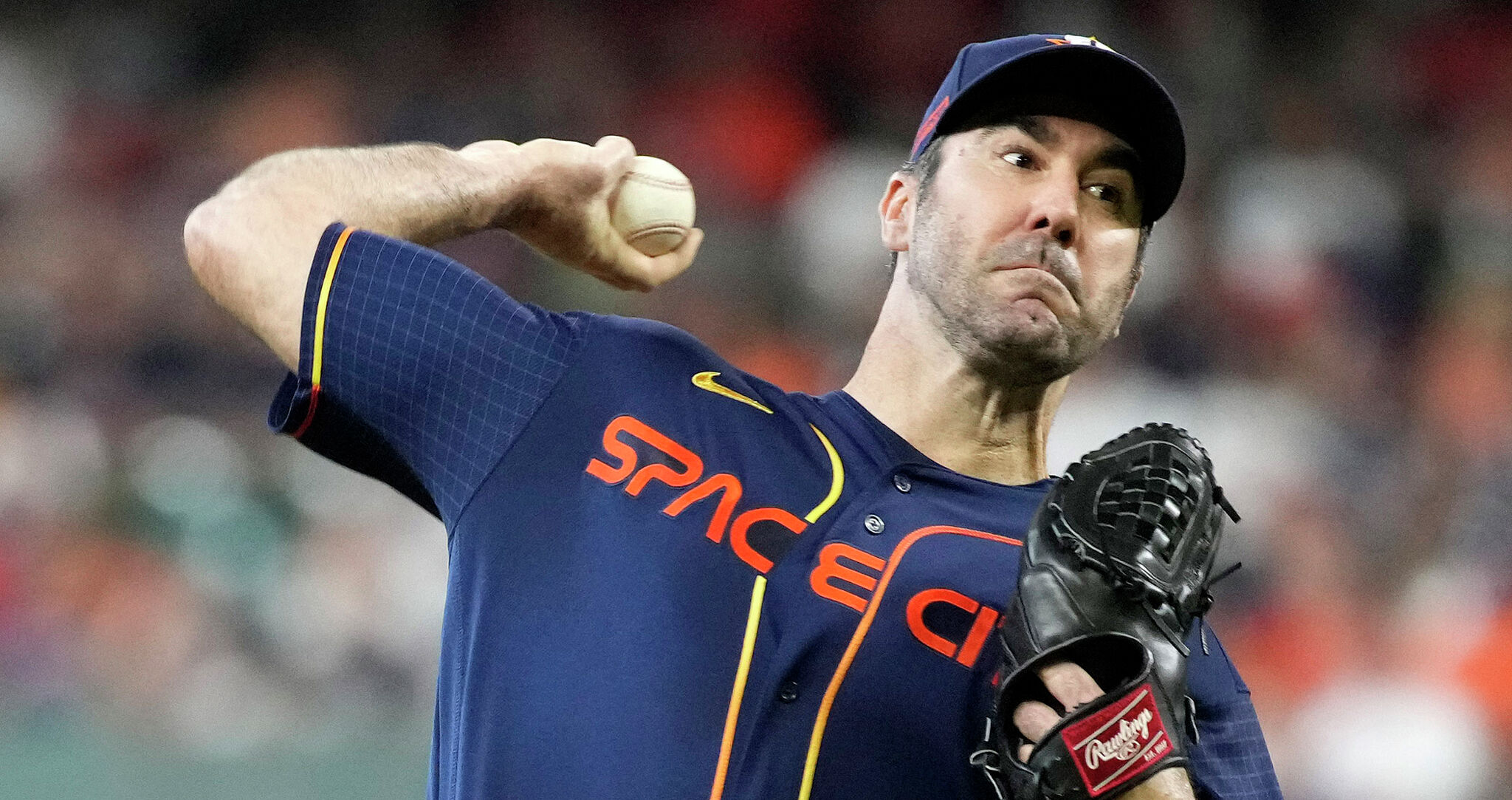 Justin Verlander signed a contract last winter that contains a player option for the 2023...