Whew, that’s cold for y’all. Next week will be fun. 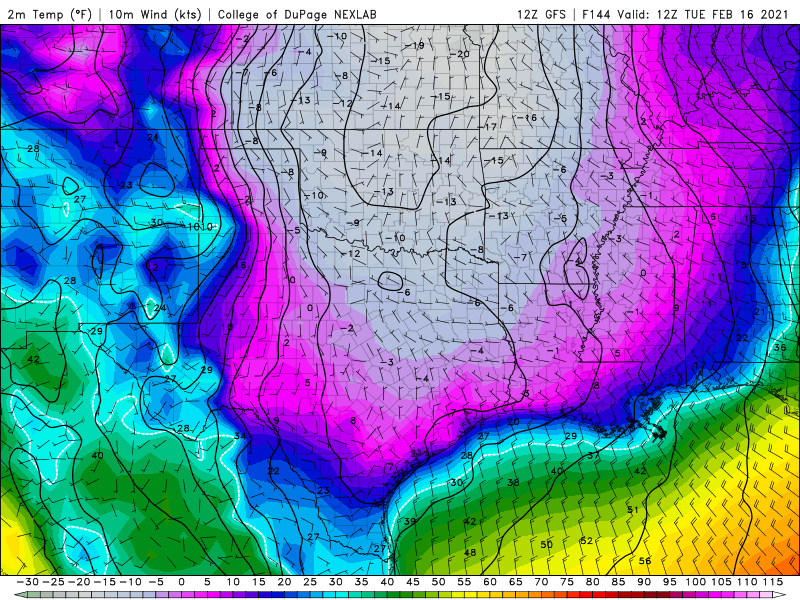 I saw the news talk about a model like this, basically where Austin gets near 0. But the official NWS forecast still is 13. A big difference, but pretty damn cold either way.

I saw the news talk about a model like this, basically where Austin gets near 0. But the official NWS forecast still is 13. A big difference, but pretty damn cold either way.

There’s an old (but useful) adage in forecasting: “Never forecast a record”. Even if the data and numerical prediction tools are suggesting as such. Records are so very anomalous, so statistically insignificant that even if all data is pointing to it, if you modify the forecast to just above record, you will be right 99.999999999% of the time.

Also, my HVAC has chosen an (in)opportune time to crap out.

All-electric home with no fireplace. We are right and proper fucked.

Actually, I managed to get a technician appointment for 12-4pm. Here’s hoping they don’t cancel it.

I’m amazed it’s already in Austin. Good luck Waldo, I’d offer you and your family a place to stay, but I figure you don’t want to drive to Houston.

Sleet and icicles all over the hill country. Unfortunately I have to get on the highway Friday and Sunday and Tuesday.

My trees are already coated in ice. Add some more ice and then the expected snow, and I fear that I’ll be looking at some serious damage.

or you could build a snow man

True enough. All of the snowmen in the last snowfall were pretty grassy, but it looks like this one may provide enough snow to make proper snowmen.

Where do you live, Mark?

Where do you live, Mark?

[Sean Bean, his head bowed and furs pulled high around his neck]

Hard to imagine anything more terrifying than being at a dead stop on an icy freeway and glance in your rear view mirror and see a big rig barreling up the road in the same lane you’re in.

5 dead in that pileup.

Different circumstance but, back the day in the UK, there was a freeway pileup that killed dozens of people. It was so bad they made a documentary about it.

It occurred in dense fog. There was a wreck, caused by people driving too fast for the conditions, and then over the space of perhaps an hour, car after car came speeding through the fog and smashed into the growing pile.

Emergency responders couldn’t get to anyone trapped in the wreckage because of the danger from the incoming cars. They struggled to close the freeway, because drivers were just blowing through the fog and did not see their signals.

It was heartbreaking watching the responders try desperately to stop car after car - at one point a fireman was throwing whatever he could find at the cars as they went by - only for there to be, after a consistent delay, the crash of another vehicle hitting the pile.

Stay off the roads if you can, people.

If memory serves, something like that happened in/near Beaumont in the last 10-15 years. Don’t think as many people died but it was 100+ cars due to dense fog.

So just a reminder…if you haven’t already, take precautions to protect the four Ps…people, pets, pipes, and plants.

$580 later and my heat is repaired. Just glad that we’re not one of the tens of thousands without power… yet.