Dusty Back Next Season?

Previously he sounded somewhat ambiguous about it but definitely not here…

“I plan on re-signing,” Baker said. “Then think, we get to spring training and [son Darren] goes to the Nationals facility on the right, I go to the Astros on the left. Same town. Same place. Fifty years later. That’s not a coincidence.”

Dusty Baker has won almost 2,000 games as a major league manager. But he is known as much for the games he hasn’t won.

Previously he sounded somewhat ambiguous about it but definitely not here…

“I plan on re-signing,” Baker said. “Then think, we get to spring training and [son Darren] goes to the Nationals facility on the right, I go to the Astros on the left. Same town. Same place. Fifty years later. That’s not a coincidence.”

Behind a firewall. What does article say?

Well, either Dusty’s in for some bad news, or we are.

Mostly a rehash of Baker’s career and something of a rehash of the Astros situation. He was interviewed when the Astros were in LA back at the beginning of the month and sounded disappointed about Dodgers fans booing him personally despite his 8 years in uniform there. Said how much he admired Correa and Altuve for their performances despite the shit they have to take. Said the Astros’ job was a “gift from god, really”.

Well, either Dusty’s in for some bad news, or we are.

Well buckle up then because I’m pretty sure it’s not Dusty who’s getting the bad news.

It was a nice article.

Dusty is a baseball lifer with an impressive list of accomplishments.

Like every other stop, he’ll get judged on what happens after game 162.

Well buckle up then because I’m pretty sure it’s not Dusty who’s getting the bad news.

From the Athletic today:

“At the moment, he is unsigned for 2022, but in the glow of victory, Astros owner Jim Crane told reporters, “Dusty deserves another shot for next year.” 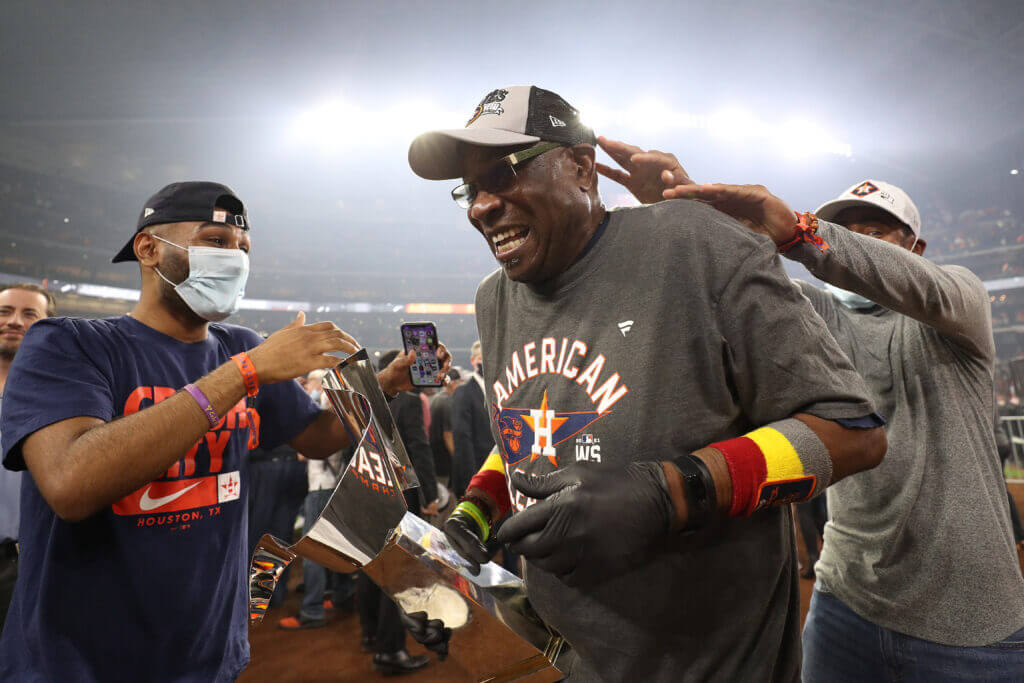 History, so much history with this man. And now Baker, at "a cool 72," is going back to the World Series for the first time in 19 years.

Crane may feel he deserves another shot, but if we can win one more round, Dusty certainly might want to exit on a high note.

Crane may feel he deserves another shot, but if we can win one more round, Dusty certainly might want to exit on a high note.

He’s coming back y’all. I don’t know why you’re engaging in such a pointless exercise speculating otherwise.

From the same damn Rosenthal article:

In case you’re wondering, Baker does not plan to retire even if the Astros win the Series. He wants the 13 regular-season victories he needs to become the first African-American manager to reach 2,000. And while one Series title certainly would be fulfilling, Baker believes such a goal is too modest. He wants two.

And he repeated to Rosenthal what he said earlier about son Darren and spring training next year:

Only this time, Darren, a 10th-round pick out of the University of California in June, will be on the Nationals’ side. “He’ll go off to the right with the Nationals, and I’ll go to the left with the Astros,” Baker said, relishing the thought.

If Dusty wants to be back, he’ll be back.He’s been pretty capable all season, the players like him, and fans generally like him. So far when it’s really mattered, he’s been flawless.

If he has learned to manage the bullpen from Strom or from an epiphany, and he manages the pen as he has in the playoffs, his coming back will be ok with me. Everything I have read and heard on radio/TV says the players love him. He has pushed the right buttons, especially against Boston, so far.

Dusty drove me nuts during the regular season, but, so far, he has done a great job managing the pitching staff and pinch hitting opportunities for Castro in the playoffs. Like Jim said, if we get the version of Dusty we have seen this October, I have no issue with him returning.

As critical of Dusty as I’ve been, I’m thankful he’s not Dave Roberts. They played six games…two off days and two bullpen days, the best bullpen in possibly baseball history with three top notch closers, and he still manages to have to start guys on short rest. That’s Hall of Fame mismanagement. I don’t understand how Friedman puts up with him.

The impression I had, perhaps unfounded, was that Friedman’s office exerts some influence on Robert’s moves. Not that there is any reason to, but to be fair, he did have a WC game and a stressful 5 game series with the Giants which included a relief appearance by Scherzer in game 5 that is thought to have precipitated his dead arm.

Roberts does appear to be the exact opposite of Dusty, though.

Why is “to be fair” necessary?

That’s true at every MLB stop.

Roberts has a job because he’s in lock step with what the FO wants.

The same was true of AJ while he was here.

A healthy FO/manager relationship will allow leeway for in game decisions.

An unhealthy one will result in the manager getting fired despite a 17 game winning streak that secures a postseason appearance.

The fair shut down last week.

To be even more fair, Roberts came into the division series with his rotation set up just fine, and in 11 games…with SIX off days mixed in there… managed to start Scherzer twice and Urias twice, while giving the same number to Corey Knebel. He managed to work in a start for fucking Joe Kelly for fuck’s sake. Roberts absolutely butchered this Postseason. That’s the only fair way to describe it.