Bring your friend to work day

Hey there. I don’t often talk about what I do for a living in here, especially since I am not doing much meteorology anymore (for work, anyways). If ever you wanted to see what I do, now‘s your chance! I will be testifying before one of the house committees on Tuesday. Here is a link if you are interested. The live video link shows up here typically the day of the event.

The Official Website of the House Committee on Homeland Security

My uncle did that activity regularly as a part of his job for Continental Airlines. Enjoy!

I average about twice per year. I used to hate it because it’s such a kabuki show but, as long as you know that going in. It can be somewhat interesting. The interplay between the legislative and executive branches is a sight to behold from within.

Sir, are you now, or have you ever been, a member of the Yankees Party?

Have you no sense of decency?

One of the things I did in my checkered legal career was write testimony for the AISD Superintendent who was to testify before a Senate oversight committee. I think Sam Ervin was the chairman, but that may be wrong. The administration had removed the District’s funding for bilingual education saying the District was not following the statute, and we were trying to get the funding restored. I did one written version for his oral testimony, which he delivered and submitted to the committee, and a longer, more formal version, which went into the Congressional Record. I traveled to Washington with him and sat with him at the table. That was one of my favorite and most interesting experiences of my law career.

We got the funding restored.

So I’m reading “This Is How They Tell Me The World Ends”, about cyber espionage and cyber warfare. Should I be as terrified as that book would suggest?

So I’m reading “This Is How They Tell Me The World Ends”, about cyber espionage and cyber warfare. Should I be as terrified as that book would suggest?

The incredible increasing complexity of technology and the ever increasing reliance upon technology worldwide is creating a massive number of threat vectors for bad actors to exploit. And that will only continue to increase as long as things (tech, software, connected devices) are engineered without security as a foundational element of design and construction. The second very real risk is people being lazy and ignorant about even basic cybersecurity hygiene. Fix those two things and much of the dystopian views of that book evaporate. 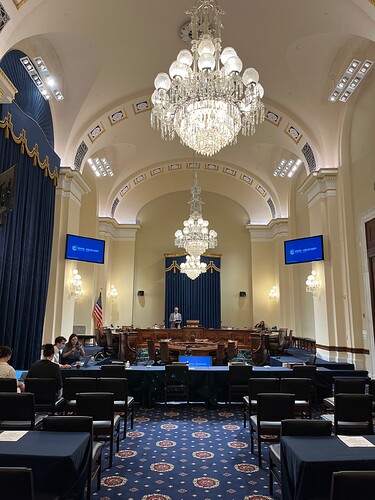 Did they produce a witness that testified that you were personally responsible for the murders of a New York City police captain and one Virgil Sollozzo in 1946?

I’m guessing this is some movie reference but I don’t know what it means.

I watched some of the proceedings and if you are an aficionado of prepared statements it made for outSTANding viewing.

I’m guessing this is some movie reference but I don’t know what it means.

The Godfather Part II. Michael Corleone has to testify before a Congressional hearing on organized crime. I’m sad you didn’t know that.

I guess this is where I have to admit that I’ve never seen Godfather Part II either. I should probably remedy that.

I guess this is where I have to admit that I’ve never seen Godfather Part II either. I should probably remedy that.

I’ve now moved past sad and am depressed. What the hell have you been doing with your life?

I’ve never seen any of them.

You are excused on the basis of chromosomal incompatibility.

While we’re incriminating ourselves, I still haven’t seen any of the Godfather movies.

I saw part II at the Plaza Theater, Vernon,Texas, home from college. It was magnificent. I’ve never watched it since, and don’t want to.