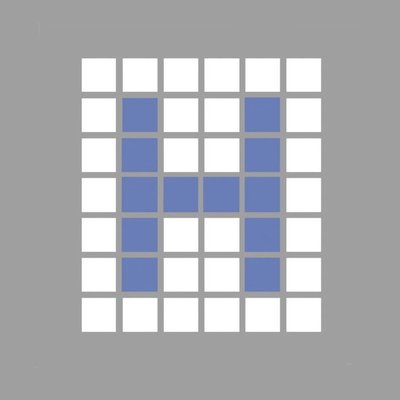 @Houstorian
Today in 2011, @Astros sale for $645M is approved by MLB, who moves them to the American League.

I wonder how the actors would have fared off they hadn’t changed leagues. I’m just glad they have had such great success.

Hard to believe we’re a decade removed from that.

My lowest point as an Astros fan happened at a Rangers/ Red Sox game here that next spring.

It was opening weekend, the Astros had lost 100+ the season before, I couldn’t watch any of the games, they were in the AL, etc.

Anyway it was a beautiful day, opening weekend, they let fans walk around the warning track before the game. Me, the wife, and the kids.

When we looped back into under the stands I saw a guy in a rainbow gut jersey. And it hit me: I wish we were doing this at an Astros game. But I had no idea then if that was ever going to happen.

Fast forward to 2018 home opener when my wife and I meet some of y’all and watched them unveil the WS banner.

On July 4, 2012, we took the family to the 4th of July thing in Wells Branch. The Astros had a six-game losing streak. The AL move, and the loss of Astros games on TV in Austin, was months away. The Round Rock Express were gloryholing themselves for the Rangers, who were two-time defending pennant winners. It was about 500 degrees outside. Things were bleak.

Anyway, I wore my Astros cap. The whole 3-4 hours I was there, having seen at least a couple thousand people, I never saw a single piece of Rangers gear. But each one of the 4-5 people I saw wearing an Astros hat or shirt would sidle up to me, say “Go 'Stros” under their breath, and then move along. It was like some kind of secret handshake.

I think it was Kevin who said back in 2005 that, when the Chron ran the tombstone article about that Astros team, he was overcome with a sense of calm. Despite how everything was going, I similarly drove home that day somehow knowing things would be okay.

Of course, that six-game losing streak turned out to be the start of a horrific 4-33 stretch of games, so it took a little while for that feeling to pay off.

Oddly, I remember that losing streak with fondness. We couldn’t watch the games on tv (which may have been for the best), so I’d sit at the computer and watch the game cast and listen to the radio broadcasts. It was a weird time, but I’d get excited about every new player, and every spark of decent play.

The odd thing I remember was the press harping about the Nielsen rating of 0 for an Astros game. It’s what pissed me off most, because I’m sure like a lot of fans I would have watched if I could. We couldn’t. 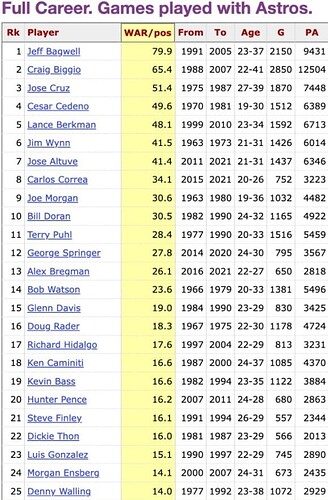 Note that Yuli will almost certainly join this list in 2022 (he’s at 13.8 WAR currently). That would give the current Golden Era teams (2017 onwards) five of the top 25 position players in franchise history as measured by bWAR. Barring disaster it’s not too hard to envision Kyle Tucker becoming #6 by the end of 2023.

Look at the headline on the chart. Just to spell it out for everyone: it’s career WAR only during the seasons they were actually Astros.

Morgan of course had two separate stints with the Astros. 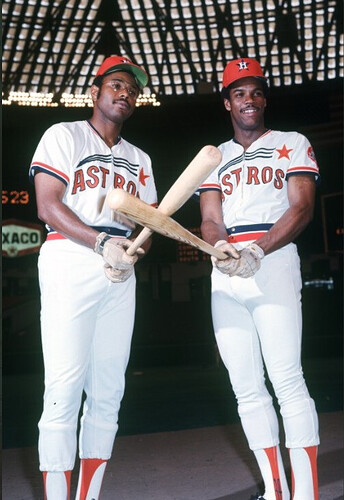