Per his instagram account, minor league free agent RHP Felipe Tejada signed with the White Sox today. Originally signed back in 2014, the reliever posted 68 Ks/16 BBs in 51.2 IP this past season in time split between Asheville and CC.

The Astros did recently re-sign a couple of their MLFAs–a pair of 28 old year old pitchers named Jon Olczak and Nolan Riggs. Both were signed in May of last year after having been with prior MLB organizations (Olczak was released by the Brewers and Riggs left the Giants as a MLFA). Olczak went on to post a 0.92 WHIP with 53 K in 48 IP in time split between CC and SL while Riggs made just 2 appearances with CC before missing the rest of the year with injury.

If this is correct (it hasn’t yet shown up on any official transaction lists), the Astros have signed ex-Horn Palmer Wenzel. The 25 year old went the indy ball route after not getting drafted last year. He stunk there posting a 1.81 WHIP after putting up a 1.43 WHIP in the spring for UT. But the Astros obviously saw something they liked in his workout day. 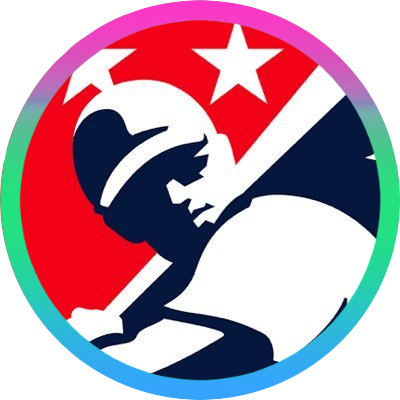 After posting the tweet, I got feedback from one of the Astros’ minor league coaches who says he thinks Nerio Rodriguez will be a big leaguer some day. 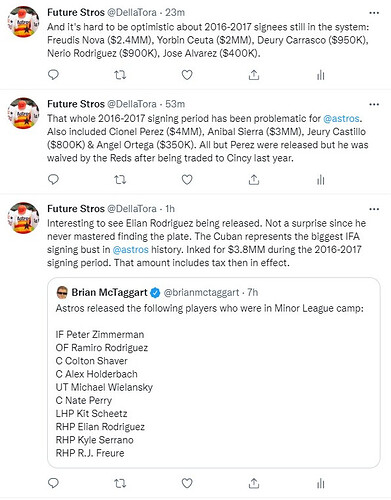 The highest drafted player among this group was 5th rounder Nate Perry who never made it above low A.

Not on the list above but Baseball America reporting that outfielder turned pitcher Carmen Benedetti has also been released. 12th round pick in 2016.

Totally unsurprising. A disappointment in every aspect of the game and often injured (which may explain things).

18 man pitching staff at AAA? Can’t be right. I assume there is still some sorting out to do.

I was sure Lance was headed for the 60 day.

This is great news and exhibit #34,664 that I never know what front offices will do.

A pair of 2019 draftees released the past few days that aren’t exactly shockers–26th rounder RHP Chandler Casey (Lubbock Christian) and 34th rounder Squish Lee (U of Maryland). Both were signed for just $1K apiece. Casey had been with the Hooks and Lee (most recently) with the Tourists.

How did I not know we had a guy named Squish Lee?

You never know what you’ve got ‘til it’s gone.

I think he was typically known as AJ.

Well that’s not nearly as fun

RHPs Mark Moclair and Kevin Holcomb have been released.

Both had major control issues while in the organization–115 BBs in 123 IP for Moclair and 65 in 93 IP for Holcomb.

Both had injury issues too. Moclair, for instance, has missed most of this season and part of last.