There has not been an announcement as to when the Gulf Coast League season will start this year. In the past it would begin in mid-June shortly after the draft. With the draft being moved to July, you could speculate the GCL season might start sometime after that.

But I don’t think so. The MLB fuckers have already wiped out two layers of short season baseball (one in the case of the Astros since they only had the team in the New York-Penn league with the ValleyCats). As a result of the pandemic, you’ve got large numbers of players needing development time in actual game situations. At the latest, I would see the GCL starting up on June 1 this year.

But screw that. Those players who are going to be assigned to a GCL roster are already there in West Palm Beach (or any of the various spring training sites). They will have been there since ST started which in the case of most of the minor leaguers will be around April 1 this year. There is no reason for MLB to keep the GCL a short season league. They should make it full season and this year start it on May 4 just like all the other AA and A ball leagues. And in the future start the league up in April. Guys who aren’t quite ready for game situations you don’t assign to a roster and keep in extended spring training just as is done now.

As far as some names you might see assigned to the GCL club this year, Top 30 prospects RHP Alex Santos, RHP Tyler Brown, OF Zach Daniels and SS Shay Whitcomb are likely to be here. More iffy as to whether other Top 30 prospects C Juan Santander, RHP Elvis Garcia and OF Richi Gonzalez get posted here or instead start out with the DSL club. Same GCL or DSL question for $1.8MM signee INF Dauri Lorenzo. NDFAs from last year (pitchers Jimmy Endersby, Cesar Gomez, Kyle Gruller, Zack Matthews, Hunter Peck and Jonathan Sprinkle along with INF JC Correa and OFs Justin Dirden and Cody Orr) are all likely to be here as well.

As I had advocated for elsewhere, the Astros will have two teams in the GCL this year–a Blue squad and an Orange squad.

Missed this article from 3 weeks ago but it said the GCL season will start on Jun 28 and run thru Sept 18. 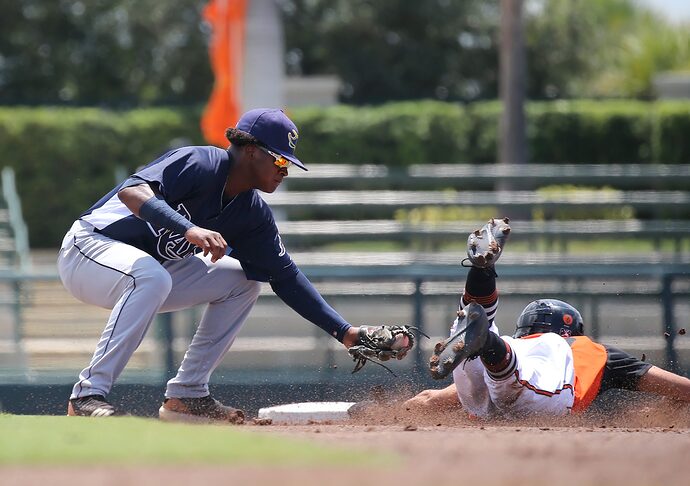 What's The Status Of Complex Leagues In Arizona, Florida And The Dominican...

The DSL's future is cloudy for 2021, plus an update on when rookie-level ball in Arizona and Florida could get underway.

The GCL is now known as the FCL (Florida Complex League) and today is opening day.

Information on milb.com regards the FCL is shoddy at the moment (thanks MLB fuckers!!!). It does show this as regards the division set-up within the league: 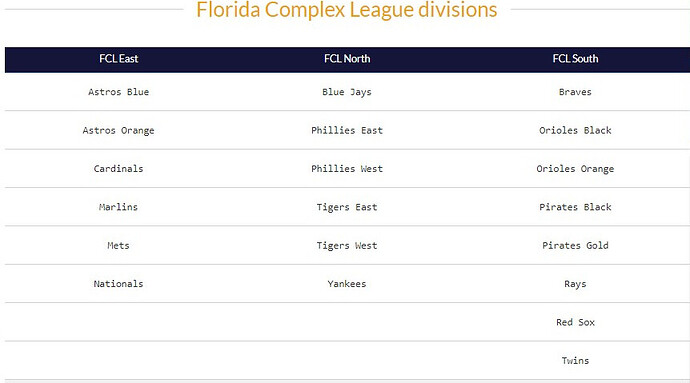 As far as the Astros, that is consistent with the earlier reporting that the org would have 2 teams in the league. However when I look at the schedule (and not just today’s but the next several months or so) I see only a single Astros team listed. So either the schedule is incomplete or the decision to field 2 teams has been reversed. The (may or may not be complete) schedule says the FCL Astros are taking on the FCL Mets today.

The Astros had definitely staffed up in contemplation of 2 teams in the league (from their Mar. 29 press release):

So if just one team that raises the question of who were the survivors and who lost jobs.

The player roster over at milb.com shows 50 players. That may not be definitive but it has been updated in the last 24 hours. And injured players aside, it does contain guys who would have been expected to be assigned to this level this season. So 50 guys plus the 20-30 more from the draft and NDFA signings next month and you’re looking at 70-80 players needing playing time. Which is why I argued months ago for 2 teams at this level when the minor league restructuring occurred and the ValleyCats were eliminated. Astros brass seemed earlier to have recognized that need in going with a Blue and Orange squad. So a really curious decision if they have now backtracked.

Side note – I was surprised to see Carmen Benedetti on the roster. A two-way player at Michigan, he had concentrated on OF as a pro (beginning in 2016 at Tri-City and rising as far as AA in 2018), but injuries in 2018 & 2019 slowed him down. I seem to recall that they tried to convert him to pitching in 2019, but there is no pitching record for him in Baseball Reference, so I am assuming that the transition failed (and/or contributed to his 2019 injury woes). In any case, at almost 27 he may be the oldest player in the league.

From the below just-published article at milb.com

…the roster limits have changed for both the ACL and FCL. Technically, there is no maximum number of players that can be on a complex league roster, according to the Major League rulebook. More practically, each organization is allowed 180 players on its Domestic Reserve List, and the active roster limits at Triple-A (28), Double-A (28), High-A (30) and Low-A (30) eat it into that. There is still enough space remaining for two complex teams, should clubs decide to have such an arrangement. Indeed, the Tigers, Orioles and Pirates in the FCL and the Giants, Brewers and Royals in the ACL are scheduled to have two complex affiliates in 2021.

So that’s definitive as to no second team for the Astros. Note also that all games in the FCL are only played against division opponents. So with no 2nd Astros team the number of division teams went from 6 down to 5 which means of course lots of off days. WTF

You’ll have to get back to me on how this makes any sense.

I’m guessing he’s a pitcher not a hitter and the roster is wrong.

That would make sense, yes.

You’ll have to get back to me on how this makes any sense.

I’ve asked Kaplan and he said he would check around. I’ve also tweeted at a Baseball America writer and (just now) a milb.com writer. I’m not expecting answers from the latter two but I might hear back from Jake. Although even then I suspect it’ll be mostly organizational spin as to what happened.

Thanks for all the effort!

To echo what VBob said, thank you so much

I think it’s pretty clear now that few of the 2021 draftees & NDFA signees will see FCL game action this year. They’ll still report to WPB but it will be more along the lines of fall instructional league for them. And whichever of those coaching staffs not manning the FCL club will instead be in charge of that instructional league group.

FCL Astros win 13-7 over the FCL Mets in the opener.

Top prospects in the lineup: C Juan Santander (#24) doubled, walked and reached on a HBP as the DH

FCL Astros fall to the Nats 5-1 in a game ended after 6 innings.

Dauri Lorenzo (playing 2B, not SS) and Richi Gonzalez (playing RF) saw action today. Hitting in the 8 and 9 slots, both went 0-2.

Elian Rodriguez was signed for nearly $3.8MM (that includes the tax then in effect) out of Cuba back in 2017 which is the 3rd highest bonus paid by the Astros to a foreign player. Only fellow Cubanos Pedro Leon ($4MM) and Cionel Perez (nearly $4MM which also includes the tax amount) were paid more. He’s pretty much been a bust since he signed. Not being able to find the plate would be a horrible understatement to describe what has been much of his problem. He’s posted 80 walks, 23 HBPs and 34 WPs in 69 IP over 3 seasons (1 in the DSL, 2 in the GCL).

So he returned this season for his 3rd straight year in the GCL/FCL. And in his first outing on July 1 it didn’t appear much had changed with 3 walks, 1 HBP and 4 hits allowed in just 1.2 innings. But his last 2 outings (including today) offer some hope with a combined 8 scoreless innings and just 2 walks and 2 hits allowed to go along with 14 Ks.

I’m told not enough pitching to staff a second club was the reason for only going with one team in the FCL. While that’s not a wholly satisfying answer there may be something to it. There’s something like 24 pitchers on the FCL roster currently but 3 weeks into the season and only half of them have seen game action. It could very well be that a number of the remaining pitchers just aren’t ready and are being brought along slowly (rehabbing from injuries, surgery or whatever).

Jairo Lopez made his season debut today with 2 scoreless frames. He’s #34 on the BA Astros top prospect list and #27 I think on the FG list.

Also a shoutout to 6’6" Brazilian pitcher Heitor Tokar who faced 15 batters today and retired all 15 including 7 by whiff.