Jim Bowden of the Athletic just released his top 50 prospects. Whitley came in at #20: $$()

Whitley has an overpowering high-90s fastball with heavy sink and three above-average secondary pitches in his curveball, slider and changeup. He had a poor regular season last year due to mechanical issues, but those were corrected in time for the Arizona Fall League, where for the second straight year he dominated. He profiles as having the potential of a No. 1-type starter.

We need Whitley to be who we thought he was.

Tucker needs to do good stuff as well.

That would change things dramatically if he could pitch up to his potential. I hope he earns his shot soon.

Whitley drops from 13 last year, and now sits behind 6 other RHP.

would be a nice boost…The Astros need one.

I am not holding my breath for Whitley. He regressed quite a bit last year.

Whitley comes in at #15 on the FanGraphs list; Urquidy at 101

Whitley comes in at 14 in Keith Law’s list at The Athletic. No other current Astros listed.

Keith Law is out with his Astros top prospects: $$$

The Astros’ system has been gutted not just by trades, but by the inevitable results of trying to draft without scouts, which has filled the system with a lot of very low-ceiling college performers. The strength here now is the international class, including a slew of hard-throwing right-handers from Latin America.

Edited to make them Right Handed Pitchers (RHP), not registered pharmacist (RPH). Sorry, I have a bit of lexdysia

It’s funny, but when you get rid of all of your amateur scouts, your drafts get a whole lot worse. If it weren’t for the work of the international scouting department, helmed by Oz Ocampo (now with Pittsburgh), this would absolutely be the bottom system in the majors.

It’s funny, but when you get rid of all of your amateur scouts, your drafts get a whole lot worse. If it weren’t for the work of the international scouting department, helmed by Oz Ocampo (now with Pittsburgh), this would absolutely be the bottom system in the majors.

Do we know for sure that his scouting angle isn’t horseshit? Obviously the system’s ranking can be explained by depletion via trades and a lower draft position in the second half of the decade. The Astros were supposedly lauded for combining scouting with analytics. Is this just Law grinding an ax and/or piling on, or is this more of the Luhnow veneer peeling off?

Keith Law really has a thing for scouts, and to me, his tweet-length opinions feel undercooked and out of date. I can’t claim to know whether the Astros’ use of scouts is better or worse than the alternative, but I feel like Law does a lot of jumping to conclusions, with pithy putdowns replacing actual analysis and argument. Maybe he’s made the argument in long-form somewhere, but I havent’ seen it. Anyway, here are five thoughts from me. Sorry for the length.

Thanks for this analysis—good reading.

a lot of jumping to conclusions, with pithy putdowns replacing actual analysis and argument

There was a review of the Astros technology in an article or show last year where they discussed that the Astros have replaced scouts in some areas with some other lower skilled person that just ran the high speed cameras. The comment was that the Astros were way ahead of the curve, everyone knew when the Astros showed up because they were the only ones with the cameras, and they had way more investment in this area than anyone else.

They would take this film and send it back to some scouts that were based in Houston and they would be able to do whatever assessment was required (at least initially) from the film.

My close friend is now retired but was a professional scout for the latter part of his career. At one time he was responsible for scouting all 30 teams. I know because I asked him a high percentage of the information he generated was never used. He was not an advance scout; he had both leagues all season.

Law is/was a scout. He places high value on seeing kids in person. An attack on scouting is an attack on him.

Houston assembled one of the game’s strongest systems in the middle of the last decade, then used it to build a formidable lineup around first-round picks (George Springer, Carlos Correa, Alex Bregman) and to trade for a trio of aces. The Astros gave up 12 youngsters, including eight present or former MLB Pipeline Top 100 Prospects (Seth Beer, J.B. Bukauskas, Daz Cameron, Michael Feliz, Corbin Martin, Colin Moran, Joe Musgrove, Franklin Perez) and three others who have reached the big leagues, in exchange for Justin Verlander, Gerrit Cole and Zack Greinke. They also parted with Vince Velasquez, Ramón Laureano and J.D. Davis in smaller deals.

After going all-in at the big league level for several years, Houston has just one prospect on MLB Pipeline’s Top 100 list: enigmatic right-hander Forrest Whitley. There aren’t any slam-dunk big league regulars among the system’s position players and its pitching stands out more for depth than difference-makers.

It’s behind the paywall, but Kiley McDaniel (formerly of Fangraphs) has his Top 100 up for ESPN: 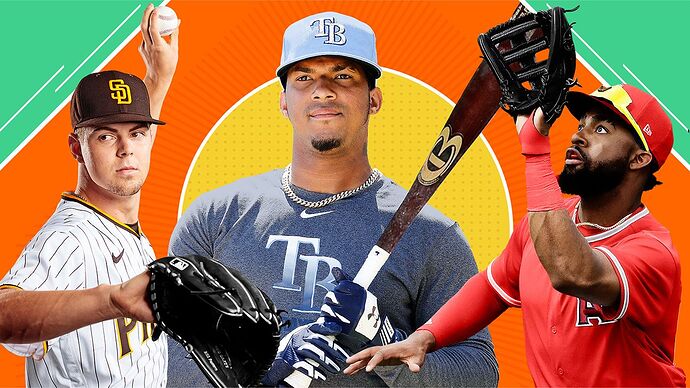 Spoiler alert: Wander Franco leads our list. Which MLB stars of tomorrow follow the best prospect since Mike Trout in this year's rankings?

He’s cautiously optimistic about Whitley at #25, noting a lot of scouts this Spring think he looks overweight again, just like his senior year of high school, and a bit laudatory of Urquidy coming in at #100, whom he feels could have a better career than a number of higher ranked prospects on the list.