Rosenthal frames this as a payroll choice, stating that they could get young cheap pitching (and possibly attach Reddick to him) and then lock up Springer.

I think it’s a test balloon by Astros management to see fan reaction to the idea of trading Correa, and not particularly because of payroll.

I think it’s a test balloon by Astros management to see fan reaction to the idea of trading Correa, and not particularly because of payroll.

Agree. As the article says, now is not a good time. Definitely feels test balloon-y.

Isn’t this what most here expect anyway?

I won’t bitch at all if he’s dealt, but I’d prefer a NL team.

Why would we expect that?

“Expect” is a bit strong. “Wouldn’t be surprised” seems about right.

Why would we expect that?

The “expectation” I was referring to was that long term, the club had to make some choices. The choice most discussed was either signing Springer long term or signing Correa long term. My feeling is that most people here expected that choice to be Springer.

So, if you think Springer is the choice, why not deal Correa soon, when you might get better value back?

Ok, so most of us knew Cole would be leaving, but now it’s a done deal. Time to move on to the rumors of Correa being traded. Could he be included in a deal for Contreras? The last one I heard was he might be included as part of a deal for Castillo from the Reds. I wonder if one might actually help the other? If we could land a legit SP like Castillo for Correa, might that also allow us to part with some starting pitching (i.e. James) as part of deal for Contreras?

Mod edit - merged from another thread

Waldo, you are a badass. Thanks.

I would choose Springer over Correa. I wonder if they have had preliminary talks with George’s people.

How much more is Correa gonna cost than Springer? double?

We have won a lot of games without Correa. But he has got some big hits for us over the years. Not sure we win in 2017 without him.

Correa is such a wild card health wise that it would be foolish to sign him long term. Trade him to fill some holes. 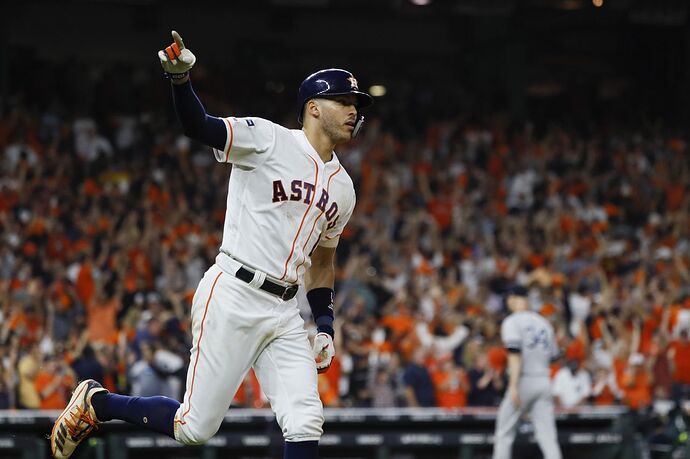 Not sure that I believe this article. I don’t think I would do that deal for Syndergaard if I was the Astros. Maybe Strom could turn him into an ace?

If Correa stays away from his massager, he might have a season that makes everyone want him to stay.

(deleted- did not see Gregorius signing)

(deleted- did not see Gregorius signing)

He signed with the Phillies.

I was fantasizing Correa for Nola before “d’oh”-ing myself. Phillies (had) a desperate need there and they are an offense-first franchise (they literally gave away a Gold Glove SS). Nola has 3 more yrs club control (as I understand it). Values would be about right for a deal IMO.