The Rockets and the Thunder are boycotting this evening’s playoff game, following the Buck’s lead. 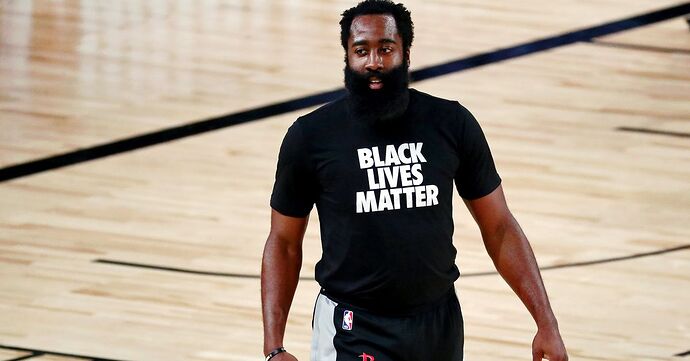 The boycott follows the Bucks’ boycott.

All three playoff games scheduled for today are being postponed.

The Brewers are currently meeting to discuss the status of their game with the Reds. Don’t be surprised if they follow suit.

I would be shocked if baseball teams actually had the sack to follow suit.

I would be shocked if baseball teams actually had the sack to follow suit.

The cynic in me says there’s no better time for the players to show solidarity than right before a CBA negotiation.

Russell Westbrook simply choked on his own dick tonight.

That was not pretty.

Not the first time Russ has been the best player for the Thunder.

Not the first time Russ has been the best player for the Thunder.

Between Westbrook’s gagging and Chris Paul somehow managing to not injure himself lacing his shoes and missing the most important game of his career, I’m beginning to think this is just not the Rockets’ year.

I could give a fuck about the NBA but I was thinking that if there were ever a year Harden’s Rockets would win the whole thing, it would be this year since this year’s championship will inevitably come with an asterisk.

Makes my eyeballs want to spin in their sockets to see that prick actually playing in the 4th quarter of an elimination game.

Westbrook has missed five layups in the last 2 minutes, and the Rockets are getting absolutely fucked by Scott Foster in the last second of the game

That was the worst finish to a close game 7 I’ve ever seen.

The ghost call on Harden is the reason why many think the fix is in with NBA officiating. That and the fact that they’ve had an official who went to the big house for fixing games.

Liked the challenge on the “charge”. Galinari hit in the elbow, was falling almost before contact was made.

Thought I was gonna die with all the missed layups, especially when 3 misses turned into the okc 3 and a 1 point deficit.

The whole last two minutes was the equivalent of blindfolding Angel Hernandez and asking him to throw knives at your dick.