The Astros have not announced their player development staff yet for next season but we know it will be missing at least one name from past seasons. Drew French was named bullpen coach at the big league level for the Atlanta Braves. Five years in the org most recently as pitching coach at RR in '19 and at the alternate site this past season.

Someone must like French. Some others thought his being a AAA pitching coach was too much too soon.

Curiosity piqued, Jim. And obviously I’m not asking you to disclose any names but if you can shed any light on why folks might have thought that I am truly interested. It’s pretty easy to guess some of it. He was just 33 when named the pitching coach for RR prior to '19. He came into the organization without a lick of professional pitching experience. Not even at the minors level.

French went from college pitcher (and a D3 one at that) into the coaching ranks and eventually gets hired by an MLB organization. A path that is extremely common in an age when computer nerds like Kyle Boddy get hired as pitching coordinators. Started out as PC at Tri-City in '16 (Framber), then Quad Cities in '17 (Cristian Javier, Enoli Paredes, Yohan Ramirez, Patrick Sandoval), and finally Buies Creek (Jose Urquidy, Brandon Bielak and again Javier, Paredes and Ramirez).

Anyone involved with the pitching side for the Astros and particularly at the upper reaches of the system almost certainly has Strom’s backing. And given Strom and the Astros’ reputation for turning around/developing pitchers and French’s direct involvement with the aforementioned hurlers, I can see how that might be highly attractive to another organization. Mike Fast is with the Braves so that probably didn’t hurt any when it came to getting a job offer.

I know nothing about French or about Strom’s opinion or involvement in his meteoric rise. Just saying an offhand comment I heard.

Buried in this The Athletic article from Jake Kaplan about the Astros’ starting pitcher depth, he discusses Bill Murphy. The 31 year old Murphy two weeks ago was elevated to the major league staff as assistant pitching coach and forms a triumvirate with Strom and Josh Miller (who has been given the title of pitching coach though obviously Strom outranks him). Kaplan notes in the article that Murphy alongside his major league duties will continue to oversee the minor league hurlers as pitching coordinator. This will he his 3rd year as minor league pitching coordinator after taking over those reins from Miller in 2019 when the latter was promoted to the major league coaching staff two years ago.

Kaplan says Miller and Murphy are both viewed as future major league pitching coaches. The clear implication is one or the other will take over if the 72 year old Strom decides to retire at the end of the season. Murphy never pitched in professional baseball (Miller spent 10 years in the minors, including 4 in indy ball). 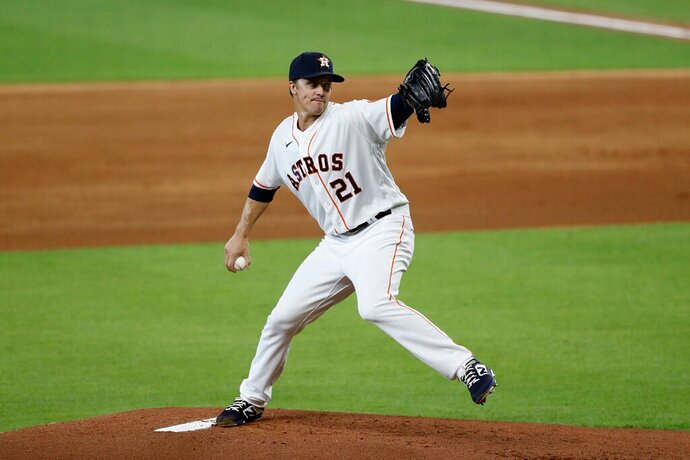 The Astros have a strong starting five. But do they have enough rotation depth?

Zack Greinke is the lone Houston starter who has thrown 170 innings in a season in his career, let alone 200 innings.

Jeremy Barnes, who had been hitting coordinator the last 2 seasons, left to join the Mets last month as their Director of Player Development Initiatives. Looking for a hitting coordinator (as well as a pitching coach for one of the affiliates) perhaps explains why the Astros have yet to issue a press release announcing their player development staff for 2021 (which normally would have occurred a month ago).

The Astros have finally released the names of their player development staff for 2021: 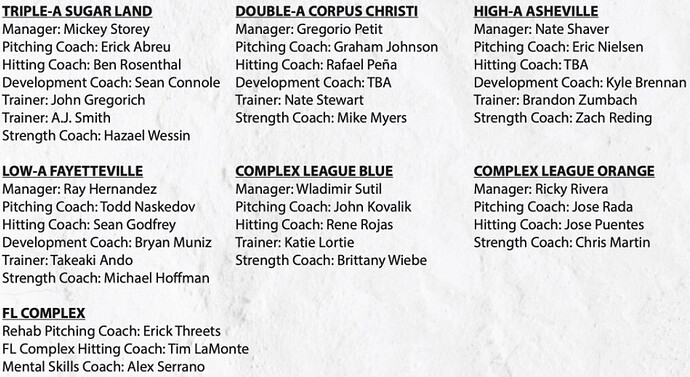 I’ll break down some of the names later.

How long has Wlad Sutil been managing/coaching?

I hadn’t noticed/realized that Ozney Guillen is no longer managing in the organization.

Thought he was going to be on the fast track at one point.

How long has Wlad Sutil been managing/coaching?

I hadn’t noticed/realized that Ozney Guillen is no longer managing in the organization.

Thought he was going to be on the fast track at one point.

The Astros let him go after just that one season in 2019. He characterized the split this way:

He admitted that some people [with the Astros] didn’t like the way he managed and he, in turn, didn’t fit with what the Astros wanted. “I grew up in a different baseball environment,” he said. “I grew up in a very caring environment and they didn’t have that there. … I think all the things that are happening to (to the Astros organization) is because they lost the human touch, the human element.”

Shift happens: How Ozney Guillen took his baseball education to Colombia and...

After a year managing in the Astros farm system, Ozney Guillen is relishing a new challenge for Colombia.

I don’t know about fast track. I think it was fascination because of his dad and that generated a lot of media coverage. From what I can tell, no other major league organization has hired him on and he remains a manager in the Colombian Winter Leagues.

Always easier to blame someone else for disappointments or for failure to advance.

Thanks for that. I saw the article yesterday when I was trying to figure out whappened to him, but haven’t had time to read it.

My thinking about “fast track” was an Athletic article from late 2019: 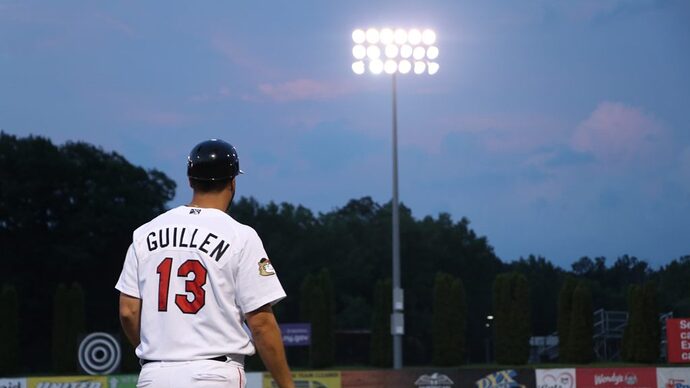 His father won a World Series, but could Ozney Guillen be the prototype for...

The kid who grew up with the White Sox now follows the Astros Way.

Guess he wasn’t the prototype.

Actually I can’t remember a year with fewer turnover. The Astros did a good job holding on to people thru the pandemic (or perhaps the pandemic created fewer job opportunities elsewhere and folks simply stayed put).

Shows how out of touch I have gotten in the last few years.

Informative thread about a vital but unappreciated aspect of baseball. Thank you!

Ran across this outstanding report on the “graduates” of the Astros’ Player Development System and that helps explain their continued competitiveness in spite of the loss of stars: 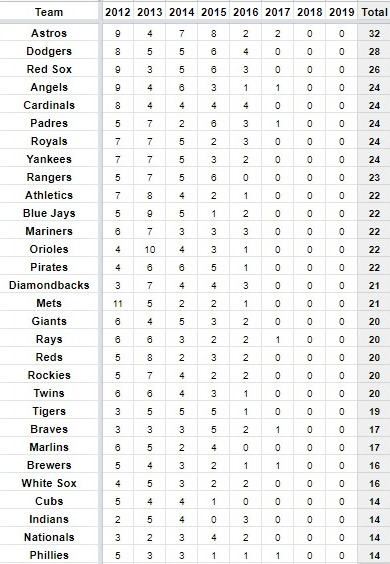 From 2012-2019, Houston leads all MLB organizations with 32 players drafted during that time period who have since graduated to the big leagues. As of 8/25/19. #Astros @jluhnow @jakemkaplan

This report is nearly two years old, but highlights the impact of the farm. Is the 2020 report available?

I’ll probably be updating that in the next month or two.

I’ll probably be updating that in the next month or two.

WB, TY again for this resource! (Not a nudge for the update…)

This is a lot of work.