DeShields and Laureano with their takes on the scandal. 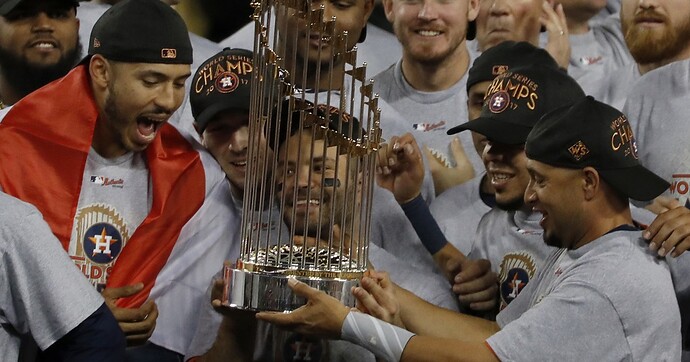 Former Astros say team should be punished if it's caught stealing

Two former Houston Astros draft picks, now in the majors with other teams, say Major League Baseball should come down hard on the team if it has proof off clandestine sign stealing.

Neither Deshields or Laureano ever played for the Astros.

For what it’s worth… Living rent-free in Yankees’ heads

Those are some of the dumbest quotes I’ve EVER read.

Where is the article where the MMP janitors complained about having to clean up all the dried sandy vagina juice the Yankees leaked all over the the visitor’s dugout floor?

Jealousy is one hell of a drug and rampant across MLB when it comes to the Astros.

Deshields may want to read that first article. Especially the part about the batter had success with electronic sign stealing with a previous team.

Exactly. If Beltran was one of the sinister architects of Houston’s system, where was he in 2016?

Idiots. Must have been the slowest news day, to even waste the space with this garbage.

I have stopped reading such drivel. I’ll wait for the report.

J.D. Davis weighs in stating that he was surprised by Fiers accusation…
https://www.yahoo.com/sports/davis-maintains-unaware-astros-sign-stealing-002933427--mlb.html

He gives a lot of props to Beltran too.

That son of a bitch. He got a cookie and smashed it up the middle. Clearly a cheater.

He’s denial though not stated I’m sure is in reference to Video (technology) uses.

If the garbage can was being used to rely signs from being picked up from the pitcher, catcher, opposing coaches then that is perfectly legal from my understanding. He didn’t deny that signs were being relayed. That happens often in MLB.

The media is assigning guilt before evidence of technologically stolen signs is established. From all that I have read the use of technology is hearsay at this point…which is obviously enough for some.

Exactly right. Nothing wrong with telling the hitter what is coming. The only issue is how do you know.

None of which the media will care about. He’s now going to be interrogated on this fiercely and presumed guilty in New York. I bet somebody even starts asking Manfred if they have interviewed JD Davis yet…at which point they probably will. Crash Davis was a damn genius - I’m just happy to be here. Hope I can help the ballclub.

His manager is the alleged mastermind. If public sentiment in NY is favorable the media will kiss their asses.

If not, they’re screwed no matter what they did or say.

The Athletic has an article, which I won’t link, where they discuss the impact of the dastardly Astros sign stealing with 9 demoted pitchers.

Because everyone knows the litmus test for staying in the bigs is how well you pitch to the league’s best offensive team. You know, the one that the vets don’t succeed against either.

The fucking media is out of control on this. The lack of response by the Astros is understandable and likely necessary, but I would have to be muzzled if I were an employee.

ETA: I posted a comment on the Athletic’s fawning article about Jomboy, which contained an unflattering comment about his NYY negative bias about the Astros. Apparently, I got under his skin at least a little because he replied to me by name.

Jomboy could have been one of the great ones. Instead he chose to be a cartoon. I get it, it means more clicks and more money. He can now not have to get that job he never wanted. But he has no credibility anymore. Not that he, or any of his fans who, as chuck once put it, have the attention span of a goldfish, care.