Same, although the hat I received yesterday wasn’t supposed to arrive until 11/29 so it may be a worst-case thing.

Same here, although my sons hat in the same order arrived yesterday. And I ordered the night of game 6.

I was glad to learn Monday that the global turkey shortage was greatly exaggerated, that would be much worse than waiting a few extra days for our Stros gear

I had some new memorabilia but they wouldn’t let me keep it. 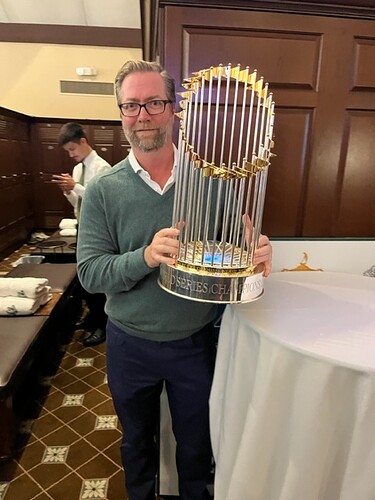 If you haven’t done any World Series shopping yet, Dick’s Sporting Goods is having a flash sale that ends in about 6 hours. 50% off a lot of stuff including a fair bit of WS gear.

I got the womens v-neck of this one, still waiting for it and some hoodies, quarter zip, an old fashioned glass, beanie, and a couple other items. All of it seems to be processing and shipping after Thanksgiving.

Thanks! I just bought a few extra things, and my Christmas shopping is about done.

I thought about it for a few minutes and decided I needed more swag so, thanks.

Just in case you need to flesh out your Christmas lists, check out these coasters memorializing four big plays from this postseason: Yordan’s walkoff HR against the Mariners, the final play to close out the sweep of NYY, the WS no-no, and Yordan’s 450-foot homer in WS game 6.

Thanks, I had to get a set of those.

I got to touch the Stanley Cup once. Never a WS trophy. That’s really cool.

If the team brings it to the WH when they come, maybe I’ll get to snap a pic of it then.

We have pictures with the Larry O’brien Trophy.

No Lombardi trophies but my youngest walked across one of the Cowboys Super Bowl banners (we were touring Texas Stadium and for some reason they had lowered some of the banners into the field. He was about 18 months old, I turned to corral his siblings and next thing I know he’s toddling across the banner. )

Got to hang out with the Stanley Cup on 2 separate occasions after the Lightning won it. After the first time, I was in Ireland shortly after and was bragging to a barman in a pub in rural Co. Mayo. “Most famous trophy in sports…blah blah blah.” He says, “Wait here a sec” and goes into the back of the bar. Comes out with a picture he hands to me and says, “This Stanley Cup?” Of course, it’s him and the cup.

I didn’t even have a picture.

I got to take a photo with the ‘17 trophy. Giles Kibbe was teaching a CLE at the UH law campus and they sent the trophy with him. Of course, it was exam week at the end of my fall 2L semester, so I look insane and frazzled in the photo. But I cherish it anyway.

We got a photo with the '17 trophy at the state Capitol. I was so concerned about preventing my son from touching the trophy - and subsequently getting taken out by a police officer - that I forgot to actually look at it.