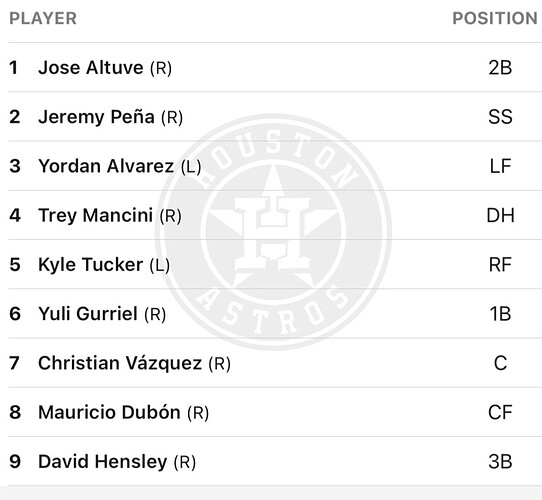 In case you needed a reminder that TK is not from Texas.

In case you needed a reminder that TK is not from Texas.

He doesn’t know about the brisket queso at HEB?

A Mancini walk and Tucker launched one 20 rows deep in to the right field bleachers.

Wish he had done that last night. I agree; he came out of nowhere for me, and he can play.

He knows about it, he just doesn’t know where to find it in the store.

That makes two of us, although I now know where to look.

Altuve! HR makes it 7-0, with the Astros out scoring the Iowa Hawkeyes’ offense.

(Of course, Iowa’s defense out scored their own offense, 4-3)

Sparks and Ford were talking about Brown and Sparks said corn spring training he needed to work on holding runners on that he was slow to the plate. So it may be something to watch in his first start.

Bielak not making a strong case for a postseason spot.

Not a game that inspired a lot of conversation. Here’s hoping we have reason to shut up the rest of the season.

I thought all of y’all were taking a nap or doing Labor Day shopping.

Took my dad to lunch for his 81st birthday. We talked about the Astros a lot though.

I was sitting this one out with online paperwork discomfort.

I had about 87 beers before and after the UT game with Mark and two friends who sit with us. I took today off from just about everything but food to dry out. I may have exaggerated the number a tad, but I had all I wanted and more than I needed. Moving kinda slow today.

Yesterday we left Fargo at 4 am and caught a plane at 10 in Minneapolis, then flew to Chicago, and then to Austin where we couldn’t land because of weather. We were supposed to change planes in Austin, but instead flew around until we had to land in Dallas for fuel, where we sat on the runway until a thunderstorm blew through. Southwest changed our flight in the air to a later Austin connection. We flew back to Austin where we missed our connection because the lady at the gate wouldn’t talk to us until she finished with a long and fruitless conversation with stranded travelers while the gate closed. She routed us to New Orleans on a flight that was loading and in New Orleans we caught the last flight back to Houston. We got to hobby after midnight.

The amazing thing was that our luggage was on the flight from New Orleans.

I would have rather drunk too many beers.

I know what you mean. My trip home from Brussels in July was a 26-hour “day” because of bad thunderstorms between DC, where I was, and Atlanta, where my plane to Austin was. I never did all-nighters, not even for law school finals, and I was brain-dead tired long before I got home.