See if this works. 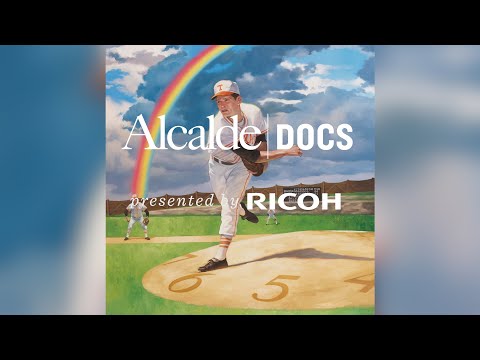 Thank you, Steve. I am very pleased with it. The editors encouraged me to share it, and I will.

This is great, Coach!! Thanks for sharing the video. At the risk of hijacking the thread for a moment, I can’t help but think about my dad’s good friend, Mike De La Fuente. He pitched for UT and Coach Disch in the late 20’s. I’ll never forget him telling me about giving up a home run to Lou Gehrig during an exhibition game at Clark Field. Supposedly, Gehrig should’ve been out on a called third strike. Instead, “on the next pitch that sumbitch hit the longest home run I’ve ever seen.” I can still hear Mike laughing about it all those years later.

ETA: Not sure if it’s still there, but for several years a game ball signed by the Yankees was on display in the front entrance of Memorial Stadium. Dad made it a point to show it to us every time we came back to Austin.

Thanks, Mike. I have heard the story about Gehrig’s homer many times, but I do not remember seeing the ball.

This would’ve been mid-80’s to mid-90’s? It was in the massive display by the front entrance that also had the football team photo for that year as well as various championship trophies. I remember Gehrig’s signature was front and center on the ball.

Do not remember that either. I rarely, if ever, went in through the front entrance. 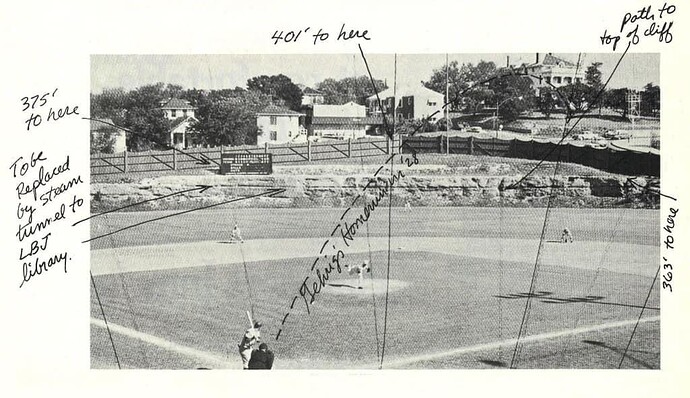 This is a photo with a diagram purporting to show the path of the homer. It does not state distance. BTW, that is a 1967 photo of Game Two of our series with UH. Tommy Moore is on the mound, and I pitched the next day.

i think i am old. yikes! god bless you/

I read the post again this morning, and I still am wondering what the heck it means. I suppose it means you are amazed/shocked at how old I am, and I am older than you. Well, join the club, dude. I have been the oldest guy here for some time. As many here say often, “Old Man jokes never get old,” but your post was no joke.

Here is the same photo without all the diagrams, John. Some cliff, eh? Practicing there every day in the spring for three years got me used to it’s being there, almost to the point I thought it was a normal part of any ballpark. Seeing it now in photos gives me a little touch of what visiting ballplayers must have thought when entering Clark Field for the first time. It has a “WTF!” quality to it, doesn’t it?

I would have loved the opportunity to play in that outfield. It looks amazing.

JIm, did the Texas OFers practice going up that wall? It looks like it would only have been accessible from LF. I have to assume they did since it was in-play. I was lucky enough to have been at UT my first year that was the last year of service for Clark.

Yes, they did. There were footholds cut into the cliff in CF. Our CFers practiced running straight at it at top speed then going up foothold to foothold to the top. Top speed was necessary because if they did not have enough momentum, gravity would take over. The RF or LF would go up the inclines in case the CFer faltered. UT CFers routinely held the hitter to a double.

ETA: I remembered an incline in RF also, but looking at the photo makes me wonder if I am misremembering. That photo definitely was my senior year.

Short RF(300’?), decent power alleys, deep LF, and a Polo Groundsesque CF. Balls hit on the grass above the cliff were in play.

life is simple, keep it simple. Appreciation of your wisdom.

That makes no sense either.