Like the FCL the season also kicks off on Monday. For the first time since 2017 the Astros will also be fielding two DSL teams…

Any random thoughts on our players? 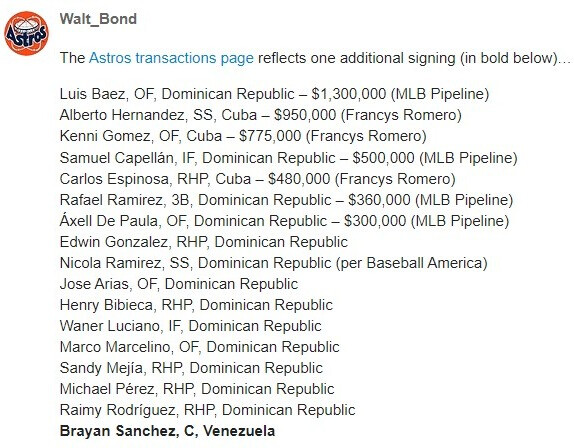 Cuban shortstop Alberto Hernandez is with DSL Blue and went 2-3 while hitting leadoff. Fellow Cubano Kenni Gomez played CF and went hitless out of the 5th spot for the Blue. Also playing for the Blue are Axell De Paula and 3B Rafael Ramirez. De Paula hit 7th and DH’d and struck out in all three ABs while Ramirez batted 9th and whiffed twice in his two ABs.

Rosters (not necessarily complete) are here… 25 Pitching Prospects To Watch In The Dominican Summer League

With the Dominican Summer League starting this week, Ben Badler brings reports on 25 pitching prospects to watch this year in the DSL.

The Orange fell to the Guardians 5-1 while the Blue were on the wrong side of a 10-9 score against the White Sox.

The two squads are a combined 1-7 to start the season.

Some notes on island play:

interesting. any news on defense?

DSL also wrapped up it’s season today with both clubs winning their games. The Orange squad finished at 36-23 after winning 9 of its last 10 games and tied for second in the 8-team North division. The Blue went 23-37 and finished 6th.

Barring some fast finishes by either Sugar Land or Corpus Christi, the DSL Orange is likely the only one of the eight affiliates to finish with an above .500 record.

The Orange squad is in the DSL playoffs and won their game today against Pittsburgh Gold 6-5.

Pronouncing that name is hard! If I am even pronouncing it correctly. Middle name easy.

The Orange lost quarterfinals game #2 to Pittsburgh Gold by a 12-4 score. Astros pitchers walked 12, uncorked 4 WPs and plunked a batter. Add a couple of errors to the mix for a nice clean ballgame.

Game #3 (which I assume is the deciding game although info is scarce) is tomorrow.

The Orange get eliminated with the 4-2 loss.

Catcher Victor Diaz went 4-10 in the playoffs with 2 homers and a walk after hitting .395/.469/.628 this month in the regular season. He has signed by the Astros on July 5 after a checkered history with two other organizations. Signed by the Phillies for $250K back in '18 as a 16 year old and was subsequently released at the end of April last year after what appears to have been a positive steroids test. The Dodgers signed him in September but released him this spring.