The shift has lessened the impact of lefties.

A righty with a good change (Devo) can be a lefty specialist too.

I miss good Devo, he was fun

Bad Devo was not fun.

NDFA signee RHP Ian Foggo started his college career at The Citadel. After redshirting in 2017, he spent the next two years working out of the bullpen where he posted more walks than strikeouts. A transfer to Charleston Southern U for 2020 then ensued where he tossed 5 2/3 innings in 6 appearances before the season was shut down. Another transfer for 2021 puts him at D2 Lenoir-Rhyne. As with his previous two stops he worked in relief. Come this summer and with a year of eligibility remaining (since 2020 of course did not count) he opts for summer ball where he first pitches in the Appalachian League where he records a FB topping 95 and a spin rate above 2500 in his 4 2/3 innings of work. After that stint he moves to the Cape Cod League and tosses another 7 1/3 innings. The Astros apparently liked what they saw in either place and extended him an offer. Control is a major issue for him–between his college and summer ball work he walked 88 in 75.1 IP. 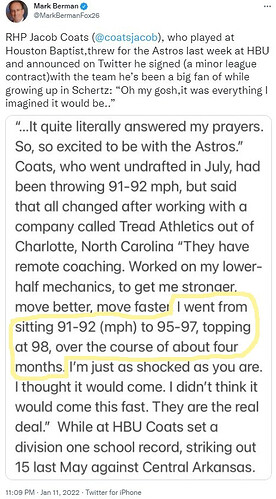 Thanks, was going to post this myself (should’ve known you’d beat me to it).

Remind me why Endersby Part II would be something we would hope for. I remember the name but nothing of significance since he was drafted. He was an Astro pitching prospect years ago, right?

He Signed as a free agent as well and made it all the way to AA in one season I believe.

Signed as an NDFA in the 2020 draft and made it to Corpus this year. Admittedly, the draft was shortened to five rounds in 2020 and Endersby most likely would’ve been drafted in a normal year. Still a hell of an accomplishment, though. Wouldn’t be surprised if he’s yet another unheralded Astros prospect who turns into a useful MLB player.

I lived this with my scout friend early in his career. He advocated for a guy he had scouted, and the Astros made the player a high draft pick, maybe even #1. My scout friend always was insecure under the surface, even long after his work had made him one of the best and most respected scouts in MLB, because he “never played The Game.” Imagine how nervous he was, as a relatively new scout, about that specific pick after the club had followed his advice, which undoubtedly was cross-checked by more experienced scouts, to make the player a priority in the draft.

We never discussed it afterwards, but I know he closely followed every AB of the guy’s career. He never made it to MLB.

ETA: I looked it up. Steve Englishbey, OF from Houston, #1 pick in 1972. My friend had been an Astros scout for about four years.

Unsigned 20th rounder Jackson Linn had a terrific freshman season with Tulane batting .353/.410/.536. After the Green Wave head coach was fired several weeks ago Linn has entered the transfer portal.

Horns are losing a couple of OFers I do believe, and our coach has a slight connection to Tulane…bring it

We have done pretty well with transfers the last couple of years too.

Unsigned 20th rounder Jackson Linn had a terrific freshman season with Tulane batting .353/.410/.536. After the Green Wave head coach was fired several weeks ago Linn has entered the transfer portal.

He withdrew from the portal and will be returning to Tulane. He’ll also be coming off a UCL injury.

Feel good story so far - no college offers - went to JC; then undrafted & ignored until hitting 98…
Shaky video (by an excited Dad) of his breakthrough pitch - w/ his promotion to HiA - highlighted by local during June.